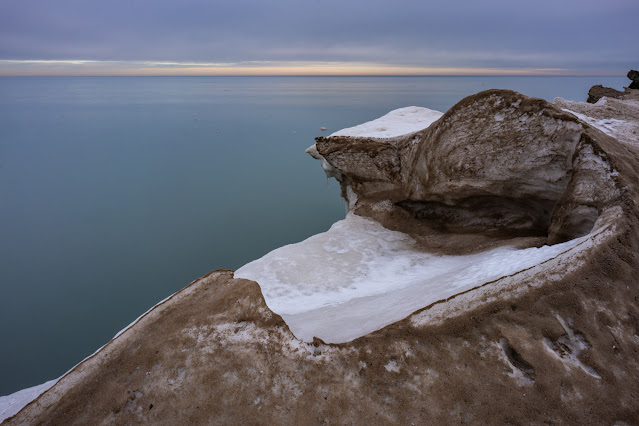 Fortunately the clouds held down the sunlight this morning which gave me more time to photograph. This is over an hour past sunrise and the light is still subdued. The thin sliver of snow on the lower left makes the picture for me with another thin white strip in the clouds in the upper right.

I was using the Loxia 21mm again with a 6 stop ND filter. Somewhere around here I dropped a 10 stop ND filter a month ago. It was in a case but I don't expect to see it again. 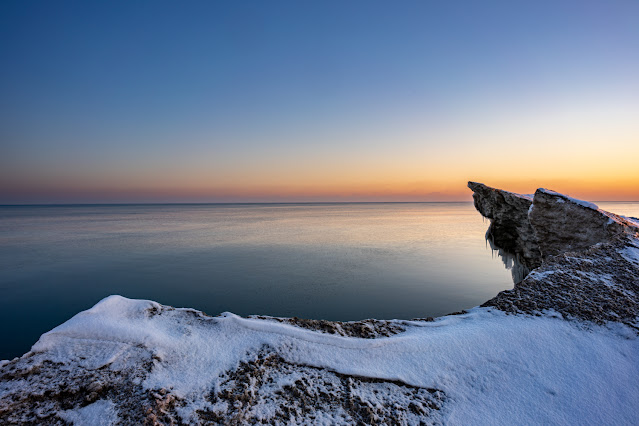 There was hardly any wind this morning though the weather report said there would be 10mph winds. I had not been to the lake since Monday 2/21/22 and with the warming trend over 40° for a couple of days I was not sure what to expect. There were a couple inches of snow most of which had blown off the ice.

This was with the Loxia 21mm with a 6 stop ND filter.

It's not often that I get to see the ice forming at the lake. The waves were not huge but carried enough force to smash chunks of ice against the ice walls throwing the remnants 30 feet into the air. 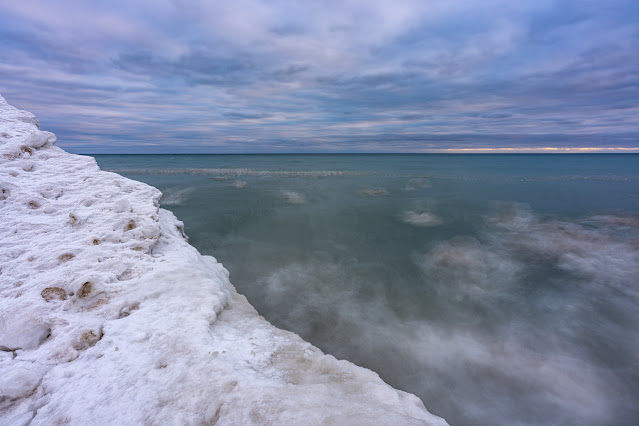 Started shooting at 6:50am, the weather is warming up into the 40's tomorrow, the time of winter when I feel sorry to see the ice start to leave. Right after taking this this shot I was hit by a wave of water and chunks of ice from my right side. The water froze on my jacket, camera and tripod. My ice cleats kept me planted on the ice - I would never go out here without them. 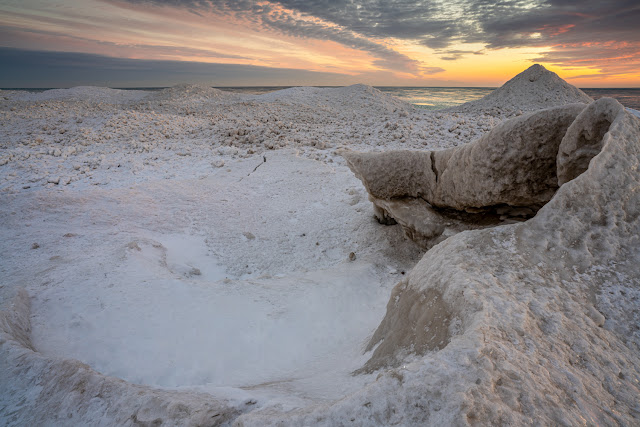 Same general spot as the last entry, but a little earlier and the tripod was set a little higher. I was surprised to see how much the ice continued to build up in the last few days. The mound to the right is probably 15-20 feet high and the waves that piled up the ice would have been pretty strong. I probably won't make it back until Thursday and there will be two days above freezing so some of this might be falling back into the lake. I'd like to see this continue into next month. There was a guy sitting on the other side of this ice formation waiting for the sunrise with his camera and tripod.

No ND filter as the water was almost still. I am not sure how I will process this image as I realize that these are not documents. The camera did freeze up twice and I had to turn off the camera, remove the battery and start up again. 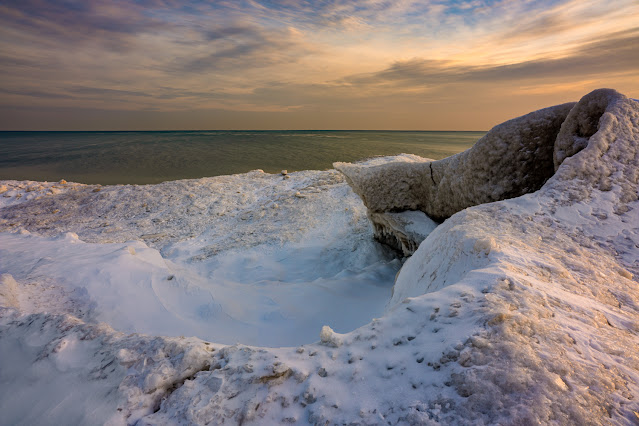 February 1, 2022. 7:27 am. Around 25° with no wind.
Sunrise was around 7:05 this morning and I got to the lake about that time. I went directly to the highest point on the beach which usually forms just north of where the old Wilmette Pier used to be. It might be 12-15 feet high. In the past ice volcanoes have formed here but the ice has continued to freeze a bit further out. The edge of the ice is probably another 50' from this formation which is hard to tell as the 20mm lens I used seems to blend the depth together. The exposure was 13 seconds but the water was hardly moving. I was hoping for some blurred wave action.
The temperature went up to 40° this afternoon and I hope the melting isn't too severe. Another 4" of snow is predicted so what happens to the ice texture is unknown right now. I'm now sure how much time I will have to keep shooting with whatever the winter has left this year.
Posted by Alan at 9:27 PM No comments: 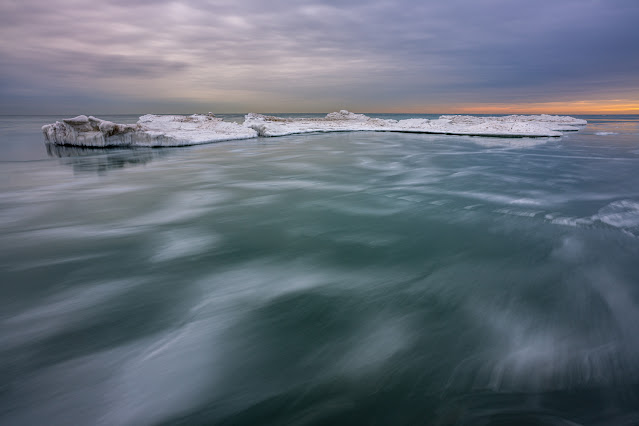 Shot with a 20mm, I don't know why I focused on the moving ice. I should have focused on the ice cluster as it barely made it into the depth of field.

I didn't feel like shooting this morning, feeling tired getting up at 6:30am and I knew that the wind would not be making any waves. But I knew that I could not miss the opportunity, whether or not an opportunity existed at all. I always have my gear packed and ready, just in case. So I headed out late at 7:30am with the school buses and commuters. And 15-20 minutes later I am at the lake. From my car I could see that new features had formed in the ice.

To my surprise, I saw that a recent section of ice had formed in the last few days, but instead of piling on top of the existing ice to make more shelf ice, it stayed about 50' off the shore. I isolated this section of ice and hoped that the transition of the time, light and ice might make something happen. 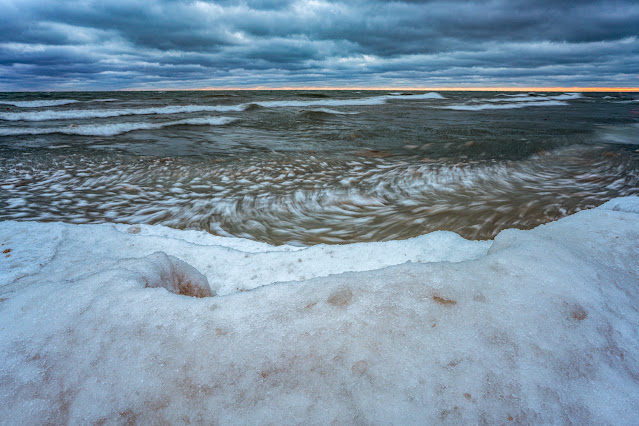 Pretty strong winds this morning, 15-20 mph. I only shot for 20-30 minutes, stopping when the camera and I were hit with water and ice. The tripod legs were frozen and the filter had ice on it. When the wind comes off the lake it's colder than the air temperature and the water it picks up from the lake turns to ice when it hits me and the gear.

This was shot with a Batis 25mm, a lens that has always worked well for me, though I've been trying to use a Loxia 25mm more. The Loxia is probably sharper under controlled conditions but at the edge of the lake there is not much under my control. 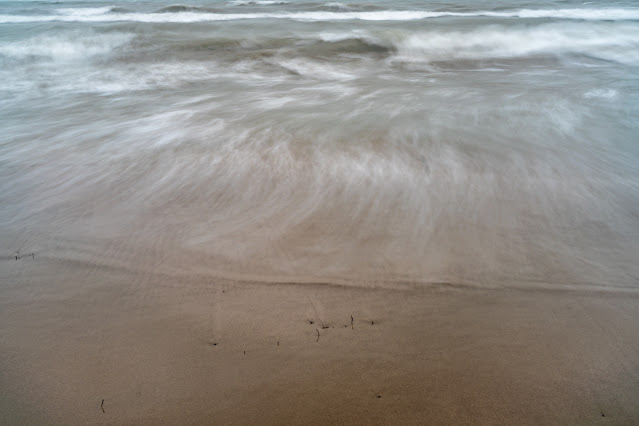 34* with 20+ mph winds coming off the lake so it felt much colder. The sting of the snow hitting my face required glasses. Batis 40mm - 2 sec @ f8 with ND 6stop. After 8 straight years of coming here it felt like I was walking onto a new stage, the same as it has always felt. 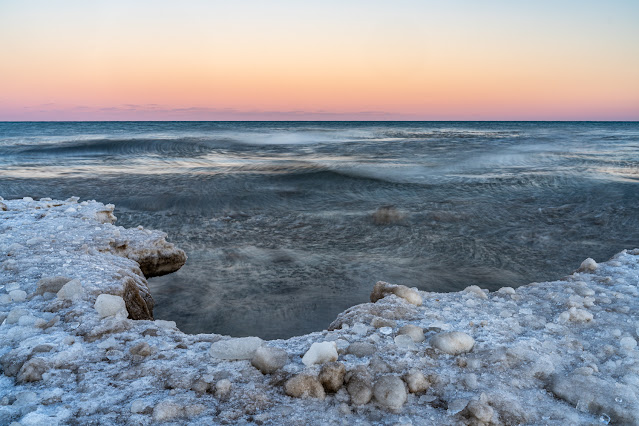 An evening shot, unusual for me. I actually went out to scout the ice as the recent snows left pockets of snow where I could easily sink to my waist. Snowshoes will be part of the plan for next winter.